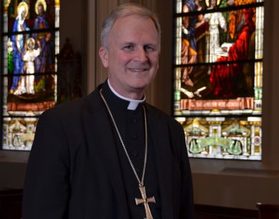 Bishop James V. Johnston, Jr., was born on October 16, 1959, in Knoxville, Tennessee. He is the oldest of the four children of Vann and Patricia (Huber) Johnston. Bishop Johnston attended St. Joseph Elementary School and graduated from Knoxville Catholic High School in 1977. During his youth, he was active in the Boy Scouts, achieving the rank of Eagle Scout. In 2005, Bishop Johnston and two other priests were awarded the Citizens Award for Bravery by the U.S. Department of the Interior for helping to save a family in danger of plunging over a waterfall in Glacier National Park.
Bishop Johnston attended the University of Tennessee in Knoxville, and obtained a B.S. degree in Electrical Engineering in 1982. From 1982-1985, he worked in Houston, Texas, for an engineering consulting firm and for an electric utility. In 1985, he left his occupation to pursue a call to the priesthood. Bishop Johnston attended St. Meinrad School of Theology in Indiana and obtained his Master of Divinity degree in 1990. He was ordained a priest of the Diocese of Knoxville on June 9, 1990, at Holy Ghost Church in Knoxville, his home parish.
Bishop Johnston pursued graduate studies at the Catholic University of America, where he obtained a Licentiate in Canon Law (1996). He served as Chancellor and Moderator of the Curia for the Diocese of Knoxville, as well as served in parish ministry. On March 31, 2008, he was ordained the sixth bishop of the Diocese of Springfield-Cape Girardeau.
While bishop of the Diocese of Springfield-Cape Girardeau, Catholic Charities of Southern Missouri was established, Trinity Hills Catholic Worker House and Farm was instituted, and four Catholic radio stations were launched. With a deliberate and a proactive approach, the number of men discerning a call to the priesthood increased from six to 16. Bishop Johnston also endeavored a historical first in August of 2014: traveling some 2,300 miles in 17 days to visit each parish and mission church in the diocese establishing its new vision, priorities, and goals: “One Church, East to West: Loving Jesus, Serving Jesus, Sharing Jesus.”
Pope Francis appointed Bishop Johnston to lead the Kansas City – St. Joseph diocese on September 15, 2015, and on November 4, 2015, the Feast of St. Charles Borromeo, he was installed as Seventh Bishop of the Diocese of Kansas City – St. Joseph. As bishop, he led the Service of Lament on June 26, 2016 to pray for and offer its sincere apology to victims of sexual abuse, making 5 commitments to advance healing for victims of abuse. He also opened seven Holy Doors across the Diocese during the Jubilee Year of Mercy, spoke at the inaugural conference of the Catholic Bar Association, and was present at the installation of the 10th Abbot of Conception Abbey, Abbot Benedict Neenan.
Bishop Johnston is a fourth degree Knight of Columbus. He is also a member of the Equestrian Order of the Holy Sepulchre of Jerusalem. He has served on the USCCB Committee for the Protection of Children and Young People, and is currently on the Board of Directors for Catholic Relief Services.